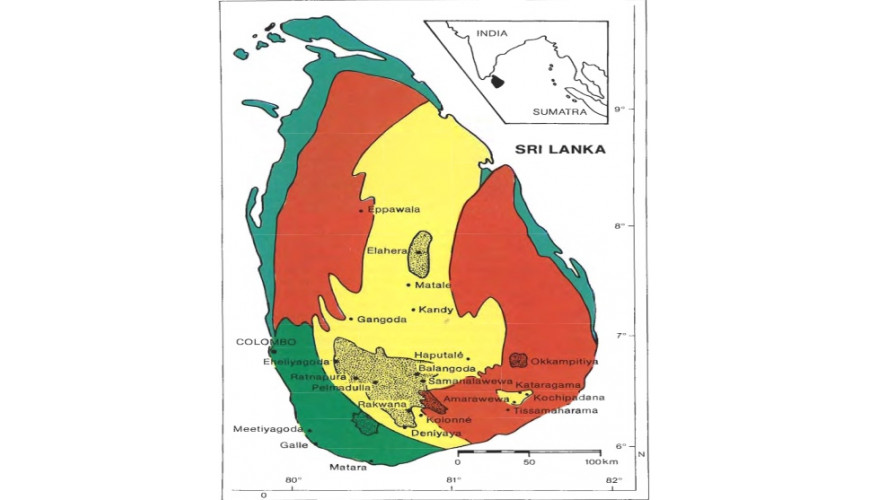 Sri Lanka, formerly Ceylon, remains one of the single most important sources for fine gemstones. Especially notable are blue sapphire, pink sapphire or ruby, and yellow sapphire; alexandrite and cat's-eye chrysoberyl; and almandite and hessonile garnet. Spinel, tourmaline, zircon, moonstone, and quartz are also relatively common; they share their country of origin with several rarer gemstones as well. Most of the gem-quality material is found in alluvial deposits throughout the island, which are mined by primitive methods. In many instances, the Sri Lankan origin of the gemstone can be determined by characteristic inclusions, several of which are also discussed in this article.

The gem riches of Sri Lanka have been legendary for centuries. One of the earliest descriptions is that of Nearchus, who in 334 B.C. mentioned an island not far from Persia where beautiful translucent gems had been found. Without a doubt, this island was the present Sri Lanka. Much later, at the beginning of the 16th century, Portuguese sailors discovered the island and returned to Europe with some of its gemstones; seamen from Holland did the same some hundred years later.

Over the centuries, tens-probably hundreds-of-thousands of carats of fine sapphire, ruby, chrysoberyl, spinel, and other familiar, as well as unusual gemstones, have been mined in Sri Lanka. Yet many questions continue to surround the geology of the deposits, and mining methods remain, for the most part, very primitive.

During the course of the author's eight trips to Sri Lanka, he has traveled all over the country and inspected the major mining areas-beginning in 1958 with the historically important Ratnapura area and completing most recently, in February and November of 1981, a study of the newer Tissamaharama area.

The author has drawn from his experiences and investigations to provide this overview of the geology of Sri Lanka and its mining and cutting practices, as well as special features of the various gem materials found there. Also examined are inclusions characteristic of Sri Lankan gemstones and production figures for the area

Just to give some idea of the quantities of gemstones exported from Sri Lanka from 1965-1966 as per Administration Report, the director of the Geological Survey of Ceylon stated that exports of all types of gemstones amounted to a little over 611,000ct.

With the establishment of the State Gem Corporation [SGC)in the early 1970s [both to improve the country's gem industry and to help curb the large-scale smuggling of gems)! the export figures improved considerably. In 1971) before the SGC had taken control  total sales of 3.4 million