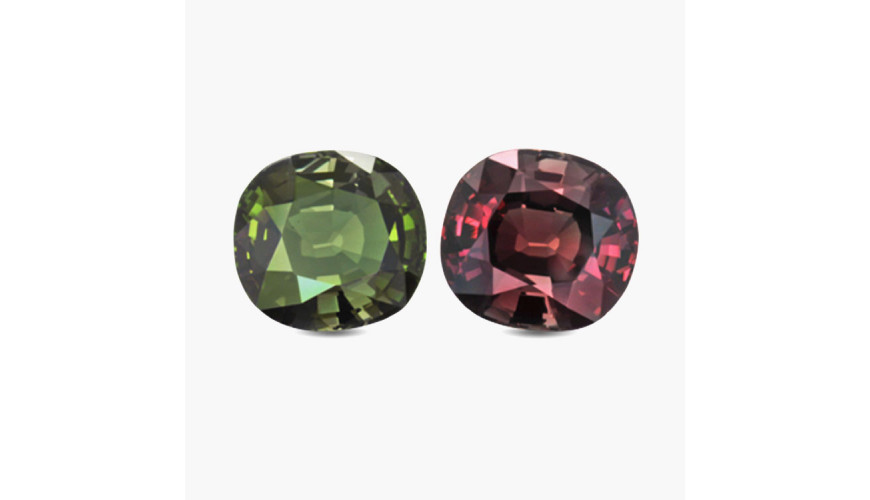 Gems in the chrysoberyl species are hard & tough, and usually green, greenish yellow or brown.

Chrysoberyl is the third hardest naturally occurring gemstone and lies between corundum (sapphire & ruby) and topaz on the hardness scale. Only corundum and diamond are harder and chrysoberyl is well known for its toughness and durability. Rubbing chrysoberyl will produce a static charge that is retained for several hours. But two varieties of chrysoberyl are among the rarest and most desirable gems on earth: alexandrite and cat’s eye chrysoberyl.

Once in a blue moon mother nature also loves to play around, so she created something called Alexandrite Cat’s Eye. A cat’s eye with a color change like an alexandrite. A phenomenal combination that’s very very rare in natural alexandrite’s.

Alexandrite itself is an extremely rare color changing variety of chrysoberyl. It’s finest dual colors are a vivid grass green in daylight and an intense raspberry red in incandescent light. That combination promoted the romantic description, Emerald by day, ruby by night.

Originally discovered in Russia’s Ural Mountains in the 1830s by miners. Since red and green were the colors of the Imperial Russian flag, the stone was named “Alexandrite” after the empire’s Czar Alexander II. it’s now found in Sri Lanka, East Africa, and Brazil, but fine material is exceptionally rare and valuable. This gem’s color transformation is so striking that the phenomenon itself is often called “The Alexandrite Effect.” You do get other color changing gemstones, (garnet, corundum, fluorite etc..) but few show such dramatically complete and vividly saturated color change as fine Alexandrite.

The mineral chrysoberyl is very rare but periodically found as an accessory mineral in granite pegmatites, aplites, and mica schists. It is also described in altered zones around the margins of ultramafic rocks (types of igneous rock) where they have been intruded by beryllium (one of the rarest elements on Earth) rich granite pegmatites. If the pegmatite fluid is rich in beryllium, crystals of beryl or chrysoberyl could form. Beryl has a high ratio of beryllium to aluminum, while the opposite is true for chrysoberyl. Both are stable with the common mineral quartz.

For alexandrite to form, some chromium would also have had to be present. However, beryllium and chromium do not tend to occur in the same types of rock. Chromium is commonest in mafic (igneous rock that is rich in magnesium and iron) and ultramafic rocks (igneous rocks with low silica content that may not be extremely enriched in magnesium and iron content) in which beryllium is extremely rare. Beryllium becomes concentrated in felsic pegmatites (rocks rich in silicate minerals and silicon, oxygen, aluminum, sodium, and potassium elements) in which chromium is almost absent. Therefore, the only situation where an alexandrite can grow is when beryllium rich pegmatitic fluids react with chromium rich country rock. This unusual requirement (chemical reaction) explains the rarity of this chrysoberyl variety. Smallest trace of chromium, 0.03% has been determined in samples from Tanzania, whereas a concentration between 0.30% and 0.73% was found in Brazilian alexandrites. 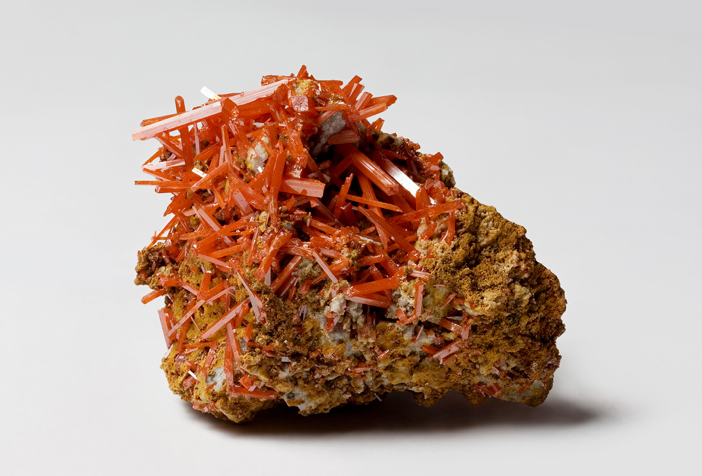 These deep prismatic red crystals were discovered in a gold mine in 1766, , Russia. Nicholas Vauquelin was intrigued by this bright red mineral known as ‘Siberian red lead’, dissolved it in acid and discovered the element chromium in 1798. It was named Crocoise (later Crocoite) by Beudant in 1832 from the Greek saffron in allusion to its color. As we know chromium is named from the Greek chroma meaning color and is hugely important in gemology as a chromophore or coloring element. This is a very rare mineral, needing specific conditions to form.

Here is a brief animation video footage of how gemstones are formed.

To put into simple words, chrysoberyl consists mostly of beryllium aluminum oxide, but the trace of chromium creates the magic touch that causes Alexandrite’s color change.

Only the hue is changed by the alexandrite effect. Tone & saturation usually remains the same.

An alexandrite comes very close to giving the wearer the benefit of owning two precious gems (Emerald and a Ruby). The gemological color grade for finest-color alexandrite is green to bluish green in daylight and red to purplish red in incandescent light, with medium to medium dark tone and moderately strong saturation.

This exceptional one of a kind 11.66 Ct Brazilian Alexandrite in this ring is described by experts as plum red at night and teal green during daylight. This ring was sold at Christie’s Geneva magnificent jewels sale in 2011 for USD: $421,501 [$36,150 Per Carat) 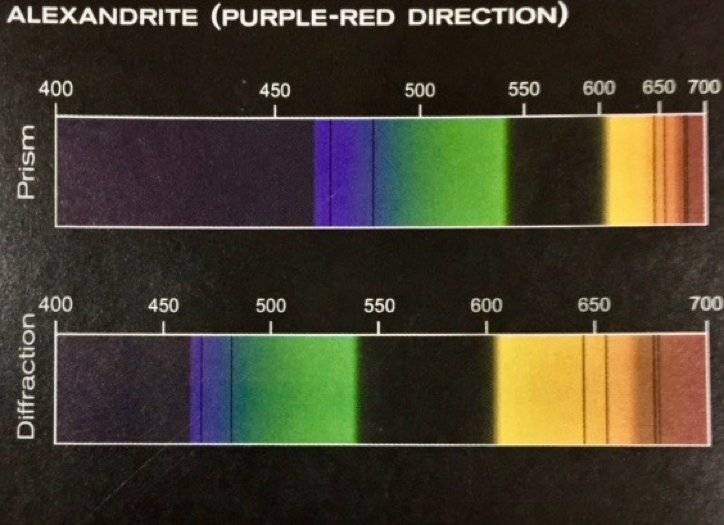 • Spectroscope reading will help you separate natural from synthetic alexandrite’s.

Sri Lanka is a major source of Alexandrites. The gems are found as pebbles in alluvial deposits. Due to the stones excellent toughness and high specific gravity help it to withstand the rugged conditions associated with alluvial deposits. Sri Lankan alexandrite’s can be larger than Russian ones, but their color tends to be less desirable. The green tends to be yellowish compared to the bluish green in daylight and brownish red rather than purplish red like the Russian origin stones. However, there is alexandrite’s in Sri Lanka almost similar color change quality as the Brazilian & Russian ones. (Examples below).

High-quality Alexandrites are difficult to find in the Ratnapura district, where mining has taken place for thousands of years. Production is limited, as many of the mines are becoming depleted.

A new chrysoberyl occurrence hosted by a pegmatite was discovered in 2004 at Kaltota near Balangoda in South Central Sri Lanka. The Geological Survey and Mines Bureau (GSMB) and the Earth Resources Engineering Department (ERED) made the discovery during a joint study on the

As we move towards South America, a huge deposit was found in Minas Gerais in the early 1980s brought Alexandrite back to the public’s attention. The discovery in the Lavra de Hematita area generated a market explosion of the previously scarce gem. For the first time in more than a century, the world was treated to the sight of fine alexandrite.

Unfortunately, the situation at the above Brazilian mining area escalated as miners scrambled to dig out the Alexandrites. Several miners were killed in disputes over mining rights. As of today, the mine is now almost depleted.

Currently, the alexandrite supply is very low. At the end of the 20th century, U.S jewelry-trade magazine reported that alexandrite had all but disappeared from the marketplace. Because of the scarcity, especially in large sizes, alexandrite is one of the most expensive colored gems.

Please note that the above price range is for top one of a kind (once sold cannot be replaced) gem quality stones. Commercial quality (low quality) prices would be somewhere between $1,000-$2,000 Per Ct. 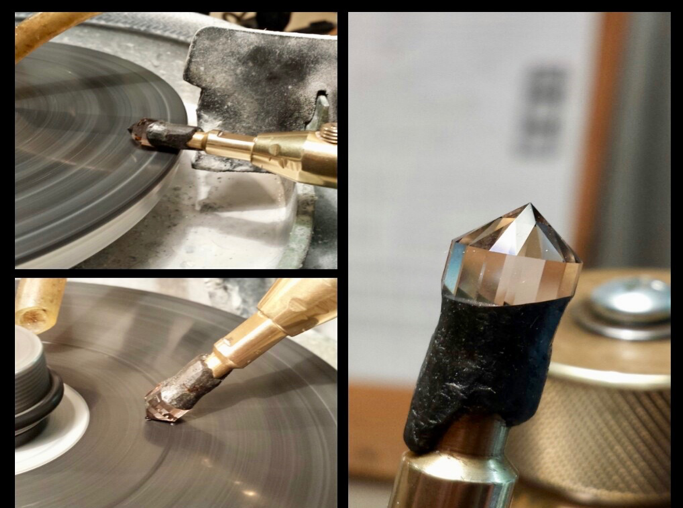 Alexandrites are most commonly fashioned into what are called mixed cuts, which have brilliant-cut crowns and step-cut pavilions. Brilliant cuts have kite-shaped and triangular facets, while step cuts have concentric rows of parallel facets.

Alexandrite’s pleochroism makes it a challenge for cutters. When fashioning alexandrite, cutters orient the gem to show the strongest color change through the crown. It’s crucial to position the rough so the fashioned stone shows both purplish red and green pleochroic colors face-up.

If the cutter gets everything right on a high-quality rough, the polish stone should be like the below example. It requires a lot of experience to cut & polish alexandrite.